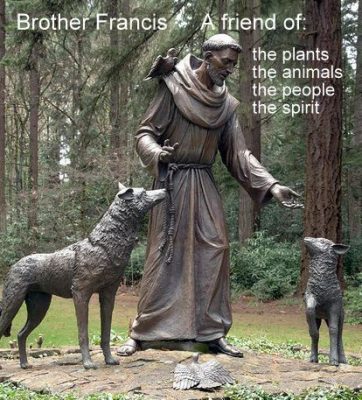 For most modern people, St. Francis brings to mind an “animal lover” (he is always depicted with a bird on his shoulder).  As was said about Thoreau, this can be said much more so for Francis, “an example of the practicability of virtue, the deep-rooted individual who has the power to awaken his neighbors from their torpid lives of expediency to lives of principle.“

He is a powerful reminder that Faith in a Loving God must be at the core of anyone hoping to practice NonViolent Action.  Below we will see how he  surmounted the same hurdles blocking parents from action:  lack of love, loss of money, dependency on intellect, desire for violence.

Preach the gospel at all times. If necessary, use words. – St. Francis

For those of you who may be unfamiliar with his history.  Francis was born in the early Middle Ages to a well-to-do family. It was a violent time, local cities warred on each other for “pride” and it appeared everyone was chasing wealth and power.  He felt himself called to take on a monumental task, the renewal of Christian ideals within the people. He did it, not by trying to control their behavior, but by changing his own.  Many people seeking reform become depressed by the size of the problem. “How can my little sacrifice make a difference?”

Francis reminds us that when we act with Love & Faith, there is always a good effect.  Certainly on ourselves — and that should be enough. Will it be enough to change the others & the world — that is beyond our control.   As Gandhi would also say, when we become too concerned about “results”, we lose the power to act with conviction.

The excerpts below are not from a biography, but from a novel based on his life (for a scholarly work on his life, see our bibliography).  The incidents described may seem fantastic, but they are consistent with his actual life and methods — he was truly unique.  God’s “little buffoon” caused many ‘doctored’ and ‘propertied’ people to give away all they had in pursuit of real joy.

From the preface by Nikos Kazantzakis (author of “Zorba the Greek”)

Everywhere about  me, as I wrote, I sensed the Saint’s invisible presence; because for me Saint Francis is the model of the dutiful man, the man who by means of ceaseless, supremely cruel struggle succeeds in fulfilling our highest obligation, something higher even than morality, truth, or beauty: the obligation to transubstantiate the matter which God entrusted to us, and turn it into spirit.

Francis  was visible at the edge of the square, hopping, dancing, his robe was tucked up. “Come one, come all!” he was calling. “Come, brothers to hear the new madness!”

Blood was flowing now from his forehead and chin . . . He was jumping and dancing rapturously, all covered with blood. “Hear, brothers,” he sang, “hear the new madness!” . . .

Francis mounted the steps of the temple, opened his arms to the jeering crowd and screamed: “Love! Love! Love!” Then he began to run from one end of the square to the other, jumping, dancing, shouting . . .

Can you Sacrifice Wealth?

. . . a merchant named Bernard of Qunitavalle came up to Francis. He dealt in cloth just as Sior Bernardone [Francis’ Father] did . . . He had heard about Francis, and had laughed at first, thinking that all this fixing of churches, kissing of lepers, undressing in public and returning the clothes he was wearing to his father was but a new series of pranks on the part of Bernardone’s pampered son.  And now here he was holding a bell and making the rounds of the streets preaching, as he said, a new madness.

Bernard was unable to understand exactly what the “new madness” was . . . Could it be that God was truly giving him the strength to resist hunger, nakedness, and scorn? . . .

“A thought has been tormenting me, Sior Francis,” he said. “Take pity on me and sooth my heart.”

Francis clasped Bernard’s hand and made him stand up. “I am listening, Brother Bernard. Not I, but God, will soothe your heart. Tell me your troubles.”

“A great nobleman gave me a large treasure to keep for him. I have guarded it for many years, but now I plan to go on a long, dangerous journey. What should I do with this treasure?”

“You should return it to the man who entrusted it to you, Brother Bernard. Who is this great nobleman?”

“Christ. All my wealth I owe to him: it is His. How then can I return it to him?”

. . . As soon as we reached the Piazza San Giorgio, Bernard inserted his key and opened his shop. Standing on the threshold, he cried: “Whoever is poor, whoever is unclothed — come!  In the name of Christ, I am distributing all my goods.”

. . . How the people ran! Women, girls, old men, ragamuffins: how their eyes shown, how avidly they stretched forth their hands in the Sunday air!  And Bernard, laughing, enjoying himself, joked happily with this one, teased that one, while with the large pair of shears he held in his hand he cut the cloth and distributed his wealth.

From time to time Francis turned to him. Bernard would sigh: “What joy this is, Brother Francis! What a relief!”

Father Silvester happened to pass by. The sight of Bernard pillaging and scattering his possessions made the priest’s heart break in two. “What a shame such wealth should go to waste!” he murmured. . . . He stopped and watched, shaking his head. Francis divined what he was thinking.

“Father Silvester, you remember what Christ says, don’t you? Forgive me if I remind you. ‘If you want to be perfect, distribute your possessions to the poor, and you shall earn a great treasure in heaven.’ So, why are you shaking your head?”

Father Silvester coughed, turned fiery red, and went on his way.   Francis felt distressed at having hurt him. “Father Silvester, Father Silvester!” he shouted.  The priest turned.  “I reminded you of Christ’s words. Forgive me. You, the priest of God, know them better than I, the sinner.”

If Francis had been closer, he would have been able to see two tears well up in the priest’s eyes.

Can you Sacrifice Intellect?

Sior Pietro was a celebrated professor of law at the University of Bologna. He had left Bologna because of the death of his most beloved student a few days before. He had been unable to restrain himself with sorrow, and had enclosed himself in his paternal home, refusing to see anyone . . . studying long hours into the night had eaten away at his cheeks, and his entire face was as dry and yellow as the expensive parchment used by monks to record Christ’s Passion.

“Forgive me,” he said, “if I start from the beginning. I had a student named  Guido whom I loved like my own son . . . At the age of twenty he had the good sense and erudition of an old man. And mixed with this brilliant mind was something which is found very seldom: passion, flaming passion. . . . A few days ago he died.”

He squeezed his lips together to hold back the rising sob . . . “On the day of his final agonies I bent over his pillow and said to him, “Guido, my child, if God decides to call you near Him . . . I want you to visit me one night in my dreams and tell me what goes on in the other world.”

. . . Sior Pietro’s voice broke and he was forced to stop again. Finally he managed to continue: “He came. Today at dawn . . . He was dressed in a strange kind of robe. No, it wasn’t a robe, it was hundred of strips of paper sewn together around his body–all the manuscripts he had written during the course of his studies, and on them were all the problems, questions, the philosphic and legal perplexities, the theological concerns . . . He was so weighted down with papers, try as he might he could not walk. ‘Guildo, my child,’ I shouted at him, ‘what are these . . . scraps that are preventing you from walking?’

‘I’ve just come from the Inferno,’ he answered me, ‘and I am struggling to climb to Purgatory. But I can’t. These scraps of paper are preventing me . . . ‘”

Sior Pietro got up. “Everything is finished now,” he said. “Before coming here I threw all my manuscripts into the fire and burned them–all my manuscripts, all my books. I am saved . . . A new life is beginning for me, glory be to God!”

Can you Sacrifice Violence?

“I am a monk from Spain. I’ve come from the ends of the earth to obtain the pope’s permission to found an order which will make war against heretics and infidels. My name is Domenic.”

“I too asked the pope for permission to found an order and also to preach.”

“To preach what , Brother Francis?”

“And aren’t you going to light wood in the middle of every village to burn all heretics, sinners, and infidels?”

“Human nature is evil—evil, cunning, demonic,” the wearer of the white robe exclaimed angrily. “The gentleness you talk about is not enough; what’s needed is force. If the body gets in the way, you must obliterate it so that the soul may be saved.   I shall burn wood in Spain, and the souls there shall abandon their bodies below on earth in the form of ashes, and mount to heaven.”

“Brother Francis, life is not a promenade where couples walk arm in arm singing songs of love. Life is war, toil, violence! . . . Dig a well if you want a drink of water; strike evildoers squarely on the head if you expect to do away with evil . . . Do not look at me in terror, poor sweet little monk. Scripture itself says the same: ‘Men of violence have taken the Kingdom of heaven by force.'”

Francis sighed. “I didn’t know violence was also from God. You have broadened by mind; my heart, however, resists and cries, ‘Love! Love!’ But who knows: perhaps our antithetical roads may come together and we may suddenly meet each other in the course of our  ascent to the Almighty.”

“So please it God,” the stranger replied. “But I am afraid you are a lamb fallen among men — among wolves. They shall eat you before you reach the goal of the ascent. Forgive me if I tell you in all frankness what is on my mind: You know all about love, but that is not enough. You must also learn that hate comes from God as well, that it too is in the Lord’s service. And in times like these, with the world fallen to the state it has, hate serves God more than love.” . . . He rose in order to leave.

“Farewell, Brother Domenic. Lions and lambs, love and force, light and fire, good and evil: all things, I want you to know, climb the same mountain, the mountain of God — only they do not know it. Hate does not know it, that’s certain; love does know it, that’s equally certain . . . I am revealing to you the happy secret: one day all shall join together at the summit where God stands with outstretched arms.

Next –> Jesus of Nazareth