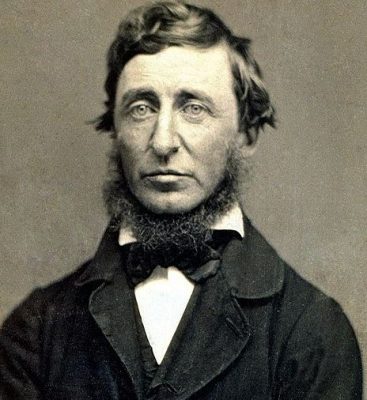 Born in 1816 in Concord, Massachusetts, from an average family. He was a graduate of Harvard college and then became a teacher in the local school — he lasted about two weeks after disagreeing with local officials. He then spent some time as a tutor and handyman, and then started to write. He found himself scandalized by the nation’s acceptance of slavery and the Mexican/American war. We have quoted liberally below from the books in the following bibliography.

On July 4th, 1845, he moved his meager belongings to a cabin he had built in the woods near Walden Pond. There he was to declare his independence from the government for the next two years. He is “an example of the practicability of virtue, the deep-rooted individual who has the power to awaken his neighbors from their torpid lives of expediency to lives of principle.”

In the middle of his life at Walden Pond he was arrested for not paying the local poll tax. He refused to pay as a way of demonstrating he did not recognize a government, “which buys and sells, men, women, and children, like cattle…” He spent a night in jail until the tax was paid by a family member.

His essay Civil Disobedience was an outgrowth of some of these experiences, some direct quotes follow:

There are thousands who are in opinion opposed to slavery and the war . . . yet in effect do nothing to put an end to them. They hesitate, and they regret, and they sometimes petition; but they do nothing in earnest and with effect. They will wait, well disposed, for other to remedy the evil . . . There are nine hundred and ninety-nine patrons of virtue to one virtuous man.

Even voting for the right is doing nothing for it. It is only expressing to men feebly your desire that it should prevail. A wise man will not leave the right to the mercy of chance, nor wish it to prevail through the power of the majority. There is but little virtue in the action of masses of men.

Under a government which imprisons any unjustly, the true place for a just man in also a prison.

But the rich man . . . is always sold to the institution which makes him rich. Absolutely speaking, the more money, the less virtue; for money comes between a man and his objects . Thus his moral ground is taken from under his feet. . .

When I converse with the freest of my neighbors, I perceive that, whatever they may say about the magnitude and seriousness of the question . . . the long and the short of the matter is . . . they dread the consequences of disobedience to their property and families .

If I deny the authority of the State when it presents its tax-bill, it will soon take and waste all my property, and so harass me and my children without end.  This is hard.  Thus the State never intentionally confronts a man’s sense, intellectual or moral, but only his body. It is not armed with superior wit or honesty, but with superior physical strength.