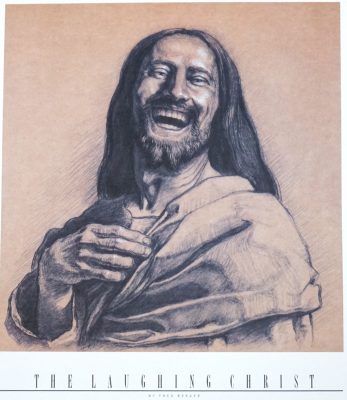 AKidsRight.Org is a group based on a positive Faith: “Are God’s ears to deaf to hear your plea? Are God’s arms to short to save…”    Many of us have problems seeing Jesus of Nazareth as the “mystical savior of the world.”  This reading is not to deny the truths in any other Faith, but just to use the traditions with which many of us are familiar.

What do you think of  a recent Conference where there was a brief presentation on NonViolence which mentioned the examples of both Gandhi and Jesus Christ — at the end someone found it necessary to say, “You should drop the Jesus talk and be more of a humanist!”     Certainly words to ponder…

A Fresh Look at Bible Stories

You may have given up on the Bible and its fairy tales and the images of Heaven as “ice cream” and Hell as “fire.”   If you don’t do anything else, please read the short Book of Jonah (you know, the guy that got swallowed by the whale). Give that writer of 3000 years ago some credit. Look for the themes expressed in that story and you will be amazed.

Jonah had refused to travel to the pagan city of Nineveh to warn them to change their ways — he wanted them all killed!  He tried to escape in boat that was hit be a severe storm.  The crew of pagans through cargo overboard and everything they could to save Jonas’ life …. what irony!

Try the Book of Job, certainly all of us can appreciate the suffering he went through and the agonizing question we all ask, “Why?”

Look at the Bible (or the writings of any Faith) for what they undoubtedly are: A history of how different people felt their God interacted with humanity. The lessons which were important through the generations. Repeating themes they felt were a call from their creator.

Think about those old Bible stories:  little old David going out to slay mighty Goliath and a blinded Samson pulling down the temple.

Perhaps of one of the most powerful themes in Scripture: that somehow, before we can see the strength of God manifest, we need to ourselves act in a manner that is convinced of that power.

Was he the only Son of God?  Did he rise from the dead?  Those are questions of personal Faith.   But was he a REAL person?  Undoubtedly yes!  It is surprising how many people actually think Jesus of Nazareth is a myth.  He is a real historical person.  We have mention of him not only in the works of Jewish historians of the time, but also the Romans.  They don’t say much — he was a religious leader and he was crucified.  You can also take comfort that some of the “counter culture” sayings we have from him are also genuine.

In his 30’s, he gives up his regular life to go out and campaign to try to convince people: “God loves us as children, we are all brothers and sisters, and we all need to LOVE each other.”  The power of just one person who really believes.

Living a life of Faith, Love, and Sacrifice

Remember perhaps the most powerful words of Jesus, who started that famous prayer (The Our Father) with the word “Abba” (Jewish for Papa, a child’s term for their father). Transforming the mighty God of Israel to a loving parent! (Too bad Jesus couldn’t have been more of a humanist!)

Can we change this amazingly corrupt and entrenched system of Family Law in this country?  Not likely.  But we just have to remember that Papa, God, can certainly help us and carry the day. We just have to take those first few steps, let go of the chair, and trust he’ll help us.

Jesus was willing to leave everything behind, because he really did have Faith. It must have been fairly obvious when you met him, or just saw what he did. The part that really scares some is he must of known the “government” was going to come for him and kill him. He could have run away, tried to fight another day…

But he even sacrificed his life, without anger or vengeance. Why do we remember him after 2000 years, forgive us for saying this, “but he practiced what he preached.”  Just listen to the following words from the Sermon on the Mount, they are words you have probably heard before:

“But if anyone strikes you on the right cheek, turn and offer him the other; and if anyone would take your coat, give him your cloak as well; and if anyone forces you to go one mile, go with him two miles.” (Matthew 5:39)

What is Jesus talking about as our response to injustice? So many people see these words as just a call to “quiet acceptance”, but that is not there at all. The focus is not even on forgiveness, but on action. We are to act in a physical sense, and to act immediately on the person who has confronted us. Commanded to magnify their action voluntarily and bringing it on ourselves – what a revolutionary concept! Are we called to be gluttons for punishment? No.

As we embrace this idea, let us add one more circumstance to the preceding passage:

“… and if someone should take your child; then …” What?

How do we magnify that great a wrong and bring it upon ourselves. Maybe the answer would have been, “then offer them your freedom as well.”

Because it will help your “oppressor” see the error of what they have done. How? They will be forced to ask and answer the question, “why has this person done this?” Perhaps not even at that moment, but they will be forced to examine their actions and our response. Does it work immediately, not always – but we have done our duty as strongly as possible by treating our “oppressor” with love and concern to the point of bringing more misery on ourselves.

“Love your enemy and pray for those who persecute you, so that you may be children of your Father who is in heaven; for he makes his sun rise on the just and on the unjust, and sends rain on the just and unjust.” (Matthew 5:44)

And, just in case, we were the ones really in the wrong – and perhaps deserved a slap on the cheek – we just offered them the chance to give us another, no harm done to anyone but us!

Please, there will be a lot of work required to bring about reform.  Some of you are more comfortable with traditional methods of lobbying and quiet marches, working inside the system, working through the courts and in the community.  Those are all quite valid.  But we also hope you will appreciate the positive addition the principles of NonViolent Action can make to any Civil Rights movement.  You will be in good company!