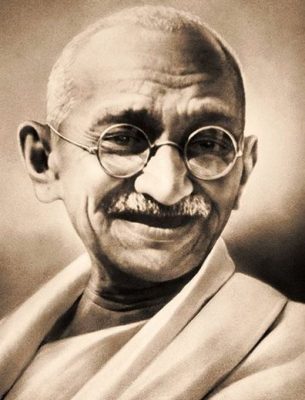 Born in India, 1869. From a well-to-do family. His father was a high official in the local province, a man of principal. Gandhi was the forth child of his fourth wife (the other three having died). His warmest affection went to his mother, he remembered her “saintliness” and “deeply religious nature”, she kept here vows and commitments.  We have quoted liberally below from the books in the following bibliography.

Growing up he stole and lied to his family, but his convictions always prompted him to confess and ask forgiveness. He remembered that sincere repentance and confession induced by love, rather than fear, had won him his father’s forgiveness and affection.

He was not unfamiliar with emotion or perfect. At a young age Gandhi (16) was caring for his father in the home, now on his death bed. His strong feelings of “lust” toward his new wife caused him to leave his father in the night, go to their room, and wake-up his wife for intercourse, even though she was pregnant and near delivery. A few moments later a servant urgently knocked at the door and summoned Gandhi — by the time he got to the sick room, his father was dead. The child that was delivered also died a few days after birth, and again he blamed himself — his sense of guilt doubled! At the ages of sixty, he still wrote, “shame of my carnal desire at the critical moment of my father’s death . . . is a blot I have never been able to efface or forget.”

While attending law school in England he began to read the Bhagavad Gita, a Hindu text similar in importance to the Moslem Koran or Christian Bible. Orthodox Hindu’s saw the Gita as the historic account of a battle in which one leader tried to avoid bloodshed, but when reminded by God of his duty, agreed to commit violent acts. Gandhi, a proponent of nonviolence saw the book as an allegory, and saw the “combat” as the duel which continually goes on within a person’s heart; however, he did agree with the Gita’s clear condemnation of inaction, and he used to guide him in also avoiding the evil associated with action.

He who is brooding over result often loses nerve in the performance of duty. He becomes impatient and then gives vent to anger . . . he jumps from action to action, never remaining faithful to any.

He who broods over results . . . is every distracted, he says good-bye to all scruples, everything is right in his estimation and he therefore resorts to means fair & foul to attain his end. Not focusing on “results” gives one the inner peace to achieve final goals, this is renunciation.

The first books of the Christian Old Testament bored him, but the New Testament “went straight to my heart.” The ideas of “turning the other cheek, and love for enemies” struck a chord within him.

At the age of 24, a new lawyer, he went to South Africa. A society which was sharply divided by color, religion, and profession — with strong jealousy between all groups. He bought a first-class ticket for a train, but was told by a conductor that all Indians rode in third — Gandhi refused to leave. A policeman was called and he was thrown off the train along with his luggage. He chose to remain off the train, it was night, he was cold and afraid — all night he brooded. Should he return to India? He decided to fight. Other Indians told him about similar experiences, that is how it is here, “you cannot strike your head against a stone wall.” He became an informal leader, he urged the Indians to be honest in all things (including business), forget religious differences, and learn English. He wrote to the railroad to arrange for first-class passage for “well dressed” Indians.  It was an incident that affected him strongly for the rest of his life.

Gandhi disliked the words and idea of “passive resistance”. The term Satyagraha, is a combination of satya (truth-love) and agraha(firmness/force). It is the “the vindication of truth not by infliction of suffering on the opponent but on one’s self .” Satyagraha is peaceful, opponents must be converted by a demonstration of purity, humility, and honesty. They are to be converted — not annihilated. Violence and anger create bitterness in the victim, and brutality in the attacker.

Appealing to the common sense and morality of his adversary was key. “It has always been a mystery to me how men can feel themselves honored by humiliation of their fellow human beings.” Satyagraha assumes there is a constant dialogue between the opponents with a view to ultimate reconciliation. Insults, threats, and propaganda only serve to obstruct the goal.

A law was being proposed to deny Indians the right to vote for members of the legislature. It required them to “register” and always carry an ID card.  Those not complying would face arrest and possible deportation.  The Indian community was outraged and at a meeting many swore by God they would never comply!

Gandhi addressed them, “The government has taken leave of all sense of decency.  We will be be betraying our unworthiness and cowardice if we cannot stake our all ….”   He told them they might be jailed; they might be beaten and insulted in jail.   They might lose their jobs, their wealth.  “But I can declare with certainty,” Gandhi exclaimed, “that so long as there is even a handful of men true to their pledge, there can be only one end to the struggle — and that is victory.”

It was not an easy road.  Government punitive measures caused many to abandon the movement.  Some resisters were deported to India with loss of property.  At one time, of the 13,000 Indians living in the Transvaal, 2,500 were in jail and 6,000 had fled the province.  Some resisters served five prison terms in quick succession, courting a new jail sentence the moment they finished the old one. Some people were treated cruelly by authorities, some were killed.

News of these events was cabled to India and England.  There was strong resentment and the authorities grew alarmed.  Plans were made for a mass march — when in a completely separate event, white railroad employees went on strike over other issues.  Gandhi immediately called off the march. It was not part of Satyagraha to destroy, hurt, humble, or embitter the adversary.  Resisters hope, by sincerity, chivalry, and self-suffering, to convince the opponents brain and conquer his heart.  They never take advantage of the government’s difficulty or form unnatural alliances.  Many, many people appreciated this gesture.

The government slowly began to change it’s tune. “You can’t put 20,000 Indians into jail.” General Smuts declared in defense of his new, conciliatory attitude.  The laws were changed.  Over 30 years later, Smuts would recall, “It was my fate to be an antagonist of a man for whom even then I had the highest respect… He never forgot the human background of the situation, never lost his temper or succumbed to hate, and preserved his gentle humor even in the most trying situations.  His manner and spirit even then, as well as later, contrasted markedly with the ruhtless and brutal forcefulness which is the vogue in our day…  His method was deliberately to break the law, and to organize his followers into a mass movement …large numbers of Indians had to be imprisoned for lawless behavior…”

A beautiful summary by Professor Gilburt Murray of Oxford: “Be careful in dealing with a man who cares nothing for sensual pleasures, nothing for comfort or praise or promotion, but is simply determined to do what he believes to be right.  He is a dangerous and uncomfortable enemy because his body, which you can always conquer, gives so little purchase over his soul.”

Raid on the Salt Works

India was a British Colony, and while in many ways it was a benevolent rule, it was still rule by another. The Indian people wanted their independence. The actions taken by the movement were very many — what is highlighted below is only ONE such action.

One of the items Gandhi focused on for their effort was the British “Salt Acts”. They made it a crime for anyone in India to purchase salt from anyone but the BritishGovernment. It was a monopoly on a substance need to survive by both humans and animals in the hot climate. It was against the law to make salt.Gandhi planned to use intentional violation of that law to put pressure on the British.

Gandhi sent a letter prior to any action to the British Viceroy.

Dear Friend, Before embarking on Civil Disobedience and taking the risk I have dreaded to take all these years I would fain approach you and find a way out. My personal faith is absolutely clear. I cannot intentionally hurt anything that lives . . . even though they my do the greatest wrong to me and mine . . . I hold the British rule to be a curse . . . It has impoverished the dumb millions by a system of progressive exploitation and by a ruinous expensive military and civil administration which the country can never afford.

It has reduced us politically to serfdom. It has sapped the foundations of our culture . . . it has degraded us spiritually. . .

This non-violence will be expressed through civil disobedience . . . My ambition is no less than to convert the British people through non-violence, and thus make them see the wrong they have done to India. I do not seek to harm your people. I want to serve them even as I want to serve my own . . .

If the Indian people join me as I expect they will, the suffering they will undergo . . . will be enough to melt the stoniest hearts.

The Viceroy only applied with a short note, “His Excellency . . . regrets to learn that you contemplate a course of action which is clearly bound to involve violation of the law and danger to the public peace.” Gandhi’s comment was, “On bended knee I asked for bread and I received a stone instead.”

Gandhi and about 75 followers marched to the sea, about 250 miles in 24 days. They were welcomed in villages and Gandhi addressed the crowds. On April 5th, 1930, they reached the sea, Gandhi picked up some of the salt that had dried from the salt spray — he had broken the law. This began an insurrection without arms, villagers everywhere went to the sea with a pan, and made salt. Within a month sixty thousand were behind bars — there was no Indian violence, Gandhi was also arrested.

They movement made a “raid” on the Dharasana Salt Works. A line of marchers moved forward to approach the salt plains that were surrounded by 400 guards and barbed wire. The marchers silently approached the fence, they were ordered to leave. On command the police plunged into the marchers and began hitting them with clubs — not one of the marchers raised a hand even in self defense. The cracking of skulls could be heard. As they fell, the marchers from behind quietly moved forward and they too were struck down. The police methodically continued to beat down the column.

Over 300 were injured and hospitalized. Two men had died. The British beat the Indians with batons and rifle butts. It became an embarrassment to the British Administration, their conscience was offended. The Indians neither cringed nor complained nor retreated, England was powerless and India invincible.

Next –> Francis of Assisi