It has been another very happy year for us all. My mother and I flew out to see Domenic in California a couple of times at the beginning of the year and he came here for Spring break. We stay at the same cabin location in the mountains.  We played a lot of put-put golf and I discovered my mother has a real nack for it. She has the most “original” putter swing in the world – but very effective. She beat me and Dom on a lot of holes, and was the only one of us to win a free game by sinking a hole-in-one. Yeah for Grandma! 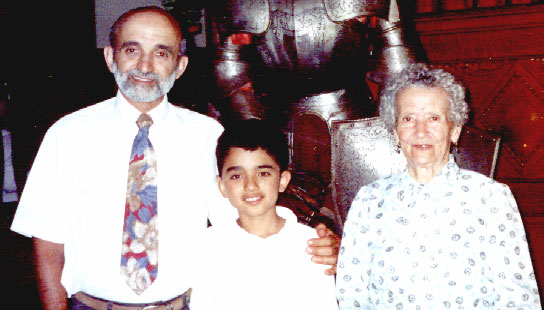 We made a couple of more trips in the Fall. The flights were uneventful, no bags lost, and almost always on time. We had only one little problem on our last return flight from California- as we were about to board the plane I realized we had return tickets to Syracuse, even though we had taken off from, and left the car in, Rochester! The ticket agent said it would be $100 each to rebook – so we saved that money, landed in Syracuse and got a one way rental to Rochester. I learned that when you book on-line and tell the system to look for the cheapest tickets for airports within a hundred miles – you don’t necessarily come back to the same place. Oh well!

The highpoint of the year was the summer. Dom and I were together for six weeks from mid June to the end of July. It was an “airplane” summer. We built a lot of plastic models: F-104, FB-111, 2 F-16s, F-15, P-51, F-106, F-20, and F-86 (I’d almost forgotten them all, but Domenic reminded me) We also flew some of the old rubber-band windup planes, flew a rechargable plane with an electric motor (which went so far it almost landed on the roof of a nearby warehouse), went to the Air Force Museum in Ohio, and the Smithsonian in Washington. Whew! We also went to the National War Plane musem in Corning, New York – home of one of the few Navy F-14s in the state. Probably the high point was two air shows we went to in Rochester and Syracuse. We same demonstrations of the F-15, F-16, and F-18 and an impressive show from the Thunderbirds. I also got the chance to show Dom my old jet, the Air Force T-37 Trainer (I don’t think he found it very impressive!).

It was a hot summer, our vegetable garden grew very well, but we did a LOT of watering. We were able to fix an old pitcher-pump that delivers cool fresh water – and also gives you a lot of exercise. Dom did the watering and Dad did the pumping! With his new bike and speedometer, Dom was able to set a record of 20 mph and road a total of about 70 miles.

We visited some old Air Force buddies in Washington. In Washington, Ron  (now a pilot for American Airlines) gave us a gas powered radio-controlled plane he had built, but which had only one flight. We struggled mightily to get it into the air, got the engine running several times while testing outside the plane – and got the engine put into the plane a few times. Unfortunately, we were never able accomplish both at the same time! We will try again this year. Ron was also received into the Catholic Church and confirmed and asked me to be his “sponsor” (the new liturgical term); but really, as an Italian, I was there as his “God Father.”

Ron and Kathy have a 7 year old daughter, Melanie. She loves pink butter on her toast and green ketchup with her French fries. Ron had just installed a new bunk bed in her room and Melanie kept asking Dom, “will you sleep with me on my new bed tonight?” Dom didn’t want any part of it, Ron and I looked at each other – that attitude will change in a few more years! Of course, as his God Father, I counseled Ron about his young daughters lax moral attitudes (Melanie is adopted, but I knew she had picked them up from Ron through osmosis). When Dom and I would go to sleep, he always wanted me to double check to see if our room door was locked in case Melanie tried to sneak in. I thought — – that attitude will change in a few more years!

Domenic discovered he loved foos-ball at the home of Tim (soon to be a former pilot for United Airlines due to the bankruptcy). Tim had a very nice table in a basement game room and that is all Dom wanted to play. Maybe with Tim out of a job we’ll be able to buy it cheap! Of course, shipping to New York will still be a problem. But since Tim may have a lot of time on his hands, maybe he’ll be able to drive it out to us (Tim, if your reading this just let me know!)

In Lyons we have a cousin, Phil, who is really a master wood craftsman, especially with a lathe. Dom and I went over there to work on a couple of projects. Phil helped us turn a drinking cup out of wood for Dom. He liked it a lot. The only problem was it was small, and dad always had to fill it up for him! Two of our cousins celebrated their 50th Wedding Anniversaries (Kate & Ray and Rose & Tony). Dom got to see a LOT of the relatives!

In what is becoming a summer tradition, Dom and I spent 3 days at Mt. Saviour Monastery near Elmira ( http://www.msaviour.org/ ). He enjoys the visits with the Brothers. We had a private guest house where we could cook for ourselves, but I asked Brother James, the guestmaster, if we could eat with the community at lunch time. They eat in silence while someone reads out load. Dom did a great job at the table and mastered the procedure for passing food around without talking. Our bed time routine was their Night prayer, where Br. Pierre does a beautiful job with the harp (he is also the webmaster for their web site!).

Grandma celebrated her 86th birthday on July 21st. Dom and I took her to a nearby restaurant (The Belhurst Castle). If I was able to get the reprints made correctly – that is the picture enclosed with this letter. Grandma is very special! We also made a trip to Niagara Falls. We visited The Cave of the Winds (where you can walk just about right under the falls) and Grandma was a real “trooper.” We watched her carefully and we all took a bath under the falls – some great pictures! We also treated her to dinner at the top of the Skylon Tower, in their rotating restaurant. It was a beautiful day and we got to watch the sun set. We also discovered that Dom loves “escargot” as an appetizer. He ate two plates!

I am continuing my efforts to see changes made to Family Law. I spent more time in jail last year, but also saw some attitudes changes, and got a few good news stories in the local papers. For more details on that see http://www.AKidsRight.Org/. My email: john@murtari.org

Overall, we have been very, very blessed and are so fortunate to have each other. God has been so good to us. What more can a person ask for than friends and family!

Best Wishes for a very Merry Christmas and a Happy New Year!