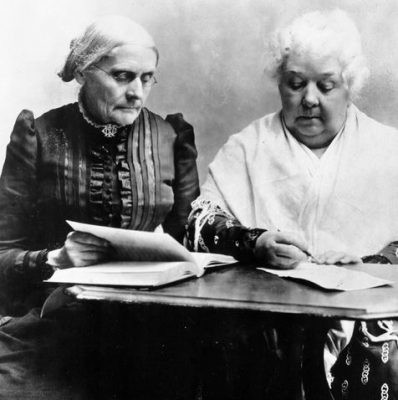 This is perhaps a study in contrast.  What follows below is NOT an example of NonViolent Action as shown in the movements of Martin Luther King and Gandhi.  In many ways it represents the same words and methods used by some groups today in their search for Family Law Reform.

But was it effective?   There was certainly no shortage of name calling and petition signatures.  There are many similarities to the decisions faced today. The thoughts expressed below are those of the authors.

Elizabeth Cady Stanton has been called the founder and philosopher of the Woman’s Rights movement. For many years she was its chief writer and speaker, she helped define many goals.  She was born in 1815 in Upstate New York.  She was born into a good home, her father, Judge Daniel Cady was a distinguished lawyer and a member of the New York Legislature.  She was the fourth of five daughters in the family after the death of the only son.   Her father encouraged her studies and independent thought.  She achieved much more education that was commonly given woman at that time.   He showed her how laws could be changed, and strangely enough — while agreeing the laws should be changed, her Father was mostly reluctant to see her involved in such “non feminine” activities.

She was very suspect of organized religion and the preachers of the day who used biblical pages to keep “women in their place.”  As she says about herself, “My religious superstitions gave place to rational ideas based on scientific facts and … as I looked at everything from a new standpoint, I grew more and more happy.”

In 1839 she met Harry Stanton, a man who was quite active in the anti slavery movement of the time. In a very short time he proposed  and she accepted.  Everyone opposed the marriage, especially her father who objected to the abolitionists and doubted he could support her daughter.  Under the pressure, she broke off the engagement, but a year later, felt she needed to run her own life.  They were married and both understood it was a marriage of equals, the word “obey” was removed from the ceremony and she also kept her maiden name, becoming: Elizabeth Cady Stanton.    In the course of their life together they had several children.

Susan B. Anthony born in 1820 had been given many more opportunities as a Quaker, a group which had a strong tradition of equality of women.  Her father was quite supportive of his daughters and tried to give them the best education possible. He encouraged them to be self reliant and self supporting.  Susan soon went to school and worked as a teacher.  She was considered quite honest, and while in youth a bit intolerant and severe in her moral judgments, these were tempered by her sense of humor and sympathy for people. She chose never to marry, but dedicated her life to the movement for reform..

She first became active in the Daughters of Temperance (an anti-drinking organization).  Her father had also become a dedicated abolitionist by the 1840s.

In 1848 Elizabeth Cady Stanton and Lucretia Mott, called for a Woman’s Rights Convention to be held in Seneca Falls, NY.  They ran the announcement in a local paper.  They decided to develop a “Declaration of Sentiments and Resolutions.”  They drew much of the wording as a parody from the Declaration of Independence.  At the last minute Elizabeth added the following, “It is the duty of the women of this country to secure to themselves their sacred right to the elective franchise.”   Her husband thought that was going too far, and even Lucretia Mott thought “…you will make us ridiculous!  We must go slowly.” Although this was to be a convention of and for women, it was unthinkable to have a woman serve as the chairman — a man was chosen.

On the second day the convention voted on the Declaration of Sentiments, all the resolutions were passed easily except for the one on the right to vote.  This was too extreme for many in the audience. They felt such an excessive demand would arouse such antagonism and derision that the movement would be killed.  After extensive and angry debate, the resolution passed by a small margin.

Of all the women in Seneca Falls that day, Charlotte Woodward would be the only one alive to cast her first vote some seventy two years later in 1920, when the US Constitution was finally amended.

There was a tremendous public outcry against the goals of the convention, for a time even Elizabeth was hesitant to continue — but she agreed to take part in another meeting to be held two weeks later in Rochester, New York.  Another group of woman organized this event and they insisted the session be conducted by a woman.  This was opposed by Elizabeth and Lucretia Mott, they called it a “dangerous experiment,” and almost walked out of the meeting before it started — but they were finally convinced to stay.  Thank goodness for a spirit of compromise!

These three movements were quite connected, and at times appeared to have conflicting goals.  Women like Stanton and Anthony got much of there early experience in the efforts against Slavery and Drinking — these groups had many female member and provided for “networking” to develop between women.  Many times their speaking engagements during “road trips” were devoted to both abolition and the cause of women’s rights.  However — there were conflicts and differences in goals.  Elizabeth Cady Stanton’s ideas about “religious superstitions’ and easier divorce did not sit well with some female members of the Christian Temperance Movement.  At times, women were also asked to delay their search for equality and the vote until those rights could be secured by Black men first.  It was argued that to link the two together would put both in jeopardy.  It would put the groups in conflict and caused divisions to develop.

With the coming of the Civil War, all woman’s rights activity stopped.  Susan B. Anthony wanted to call more meetings, but the other woman wouldn’t hear of it in a time of national crisis. They were sure that when peace was restored the women would be rewarded for their patriotic contributions. An appreciative government would give them their right to vote.  Susan thought this was a naive expectation.

Stanton would speak forcefully in words that are amazingly similar to what many “men” say today in their quest for reform:

“Society, as organized today under the man power, is one grand rape of womanhood, on the highways, in our jails, prisons, asylums, in our homes, alike in the world of fashion and of work.  Hence, discord, despair, violence, …. until the mother of the race be made dictator in the social realm.  To this end we need every power to lift her up, and teach mankind that in all God’s universe there is nothing so holy and sacred as womanhood.”

During Reconstruction, the demand for woman suffrage moved from the state legislatures to the U.S. Congress. “Up to this hour we have looked to State action only for the recognition of our rights,” Anthony explained, “but now … the whole question of suffrage reverts back to Congress and the U.S. Constitution.” In 1865, she and Stanton petitioned Congress for reform for the very first time.  Many feminists now believed that the federal government could become a major force for increasing democratization and social reform. Stanton & Anthony wanted “national citizenship” not only because it was more efficient that state by state action, but also because it seemed more consistent with their claim that women had the same natural rights as men.

Reform Progress halts: ignored by Political parties and damaged by the Supreme Court.

The movement was growing and in the national elections of 1872 Stanton and Anthony supported the Republicans, who had a plank in their platform (some called it a sliver), promising “respectful consideration for women’s demands for additional rights.”  The Republican victory of 1872 solidified the party’s control and proved to be the end for this era for reform.  It showed no interests in furthering women’s rights.   In 1875, the US Supreme Court ruled against the argument that the 14th and 15th Amendments gave women the right to vote.  That “voting” was a privilege  which each state granted to whom it deemed fit. It took almost 50 years for the effort to refocus and to achieve Constitutional Amendment.

Susan B. Anthony made a clear argument that the Government does NOT give us our rights:

“The Declaration of Independence, the United States Constitution, the constitutions of the several states and the organic laws of the Territories, all alike propose to protect the people in the exercise of their God-given rights.  Not one of them pretends to bestow rights.”

The movement always suffered from divisions in the ranks. After a split in 1869 there was the National Woman Suffrage Association (NWSA), led by Stanton and Anthony, and the American Woman Suffrage Association (AWSA), led by Lucy Stone and Harry Blackwell.  Susan B. Anthony sought unification behind a single goal of the national right to vote.  The groups joined to form the National American Woman Suffrage Association (NAWSA) in 1890.  The goal was to ignore some of their other differences and just focus on the vote.  This would later cause conflict with Stanton who still sought a “larger” solution to setting women free.  She would be forced to a peripheral role, especially because of her increased antipathy toward organized religion of the day.

Stanton died in 1902 and Anthony four years later — never gaining the right to vote.  They were remembered quite differently. Many devoted followers made Anthony into a “suffrage saint.”  Stanton was not nearly as glorified.  Their common conviction about the importance of the vote had developed into two quite different approaches.  Stanton’s perspective had been defeated.

Her insistence that suffragists have a common political program for social reform had been discredited.  Instead, Anthony’s belief that no other issue must be allowed to intrude on the political equality for women had come to predominate.